Ganna Gryniva is a Berlin-based vocalist, pianist and composer. Devoted to exploring her voice in contemporary music, her diverse output includes work as a bandleader, interdisciplinary performer, improvisor and sidewoman in numerous national and international musical projects.

Having roots in Ukraine and Germany, Ganna Gryniva aims to bring into play her multicultural background as a means of unveiling her musical identity. Her work as bandleader and composer combines various musical worlds from jazz to Ukrainian folk to classical and experimental music.

Ganna performs regularly with a variety of ensembles and her own groups such as the Ukrainian ethnic jazz quintet GANNA, free improv voice-drums duo JOGA, the international Kenneth Dahl Knudsen Modern Lyric Orchestra, the interdisciplinary project INTERLINK Music & Dance, GANNA Solo performance with loops and electronica for voice and piano.

Recent highlights include the collaboration with Kurt Rosenwinkel and his label Heartcore Records: Ganna arranged and sang the song „Spivanka“ for the label´s anual project “Heartcore for the World”. The single was released on Heartcore Records in March 2020 and it features boys from the orphanage “Living Pearl” in Ukraine as well as jazz greats Louis Cole on drums, Michael League on Bass, Pedro Martins and Daniel Santiago on guitars. In August 2020, the label Double Moon Records and Jazz Thing Next Generation series release the new album of Ganna´s quintet GANNA. In February 2020, Ganna started to work as the coach for voice and composition for the project „LAUT!“ of the Deutsche Oper in Berlin. It will premiere in October 2020.
Since 2018, Ganna has been supported for three years in a row with a grant from the prestigious „New Liszt Foundation“ to support Ganna´s researches on folklore singing traditions in Ukraine and production of the new album.
Further highlights include the Germany-wide tour with GANNA in April 2018, sponsored by the Berlin Senate for Culture and Europe, concerts at Gewandhaus Leipzig and Kaisersaal Erfurt, performance at the UNISA Voice Competition in Pretoria, South Africa. In January 2017 Ganna became a singer and composer for the international project CHAUD! invited to write music for a jazz orchestra under the direction of the prominent composer and conductor Christoph Cech. This was followed by an album production as well as a tour in Germany, Austria and Switzerland. In the same year Ganna was repeatedly awarded the prize of the “Society of Friends and Supporters of the University of Music FRANZ LISZT Weimar”. In August 2016, Ganna became a finalist at the International Voicingers Competition in Zory, Poland.
Various musical collaborations have led Ganna to tours in Austria, Switzerland, Denmark, Greece, Polen, Ukraine, Latvia, Estonia, Lithuania, Hungary, South Africa and others.

Currently Ganna is doing her BA in Improvised Voice at the Music Conservatory Franz Liszt in Weimar, where she studies with Michael Schiefel, Jeff Cascaro and Frank Moebus.
Ganna holds a Bachelor of Arts in Philosophy from the University of Leipzig and she is a scholarship holder of the German Academic Foreign Service. 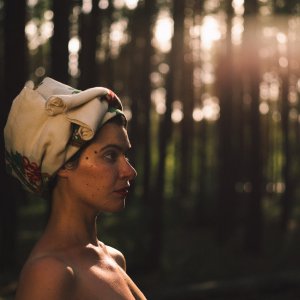